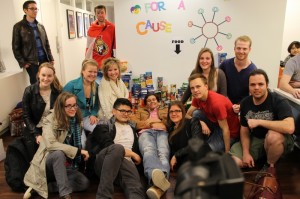 Yesterday we held our first ever ‘Carnival for a Cause’ and with over a month of buildup I must admit, the event did not disappoint. Although the skies were blue and it had reached 17 degrees outside, more than 80 students participated in the various activities and events organized.

The carnival kicked off with a quick thanks to all those who had brought in food donations in support of the Vancouver Food Bank. Collectively EC students and staff brought in more than 500 items for the Food Bank! Games promptly got underway and students in groups of all sizes headed off to play Wii Tennis, Bean Bag Toss, Canadian Jeopardy, The Straw Tower and many more. Students also had the opportunity to express their inner creativity by participating in a number of EC Vancouver Harlem Shakes (videos coming shortly).

The games were a great success as every room had at least 6+ students at all times. I think the event really became a success when the ‘Canadian Jeopardy’ room was packed so much so that it became standing room only. Using the smartboard as the jeopardy screen, Jason fit right in as Alex Trebek.

Whether it was our Centre Director throwing bean bags or Aaron’s intent on crushing everyone at Wii Tennis, the staff really took on the event with vigor.

The event wrapped up with a quick shout out to the Cambridge CPE class who won the award (pizza party) for most items donated (over 180+). We then headed downstairs to build up the food castle, and wrapped the event with a student and staff raucous rendition of the Harlem Shake.

Thanks to everyone who participated, the event was a grand success and we will certainly look to replicate it next year!