A few weeks ago, our students were able to listen to an interesting lecture about British Literature. At the end they all wrote a summary of what they had learned. The best writing task would be put up on the EC Blog for everyone to read and enjoy. And the winner is… Fernanda!

‘The lecture British Literature was an introduction about the three men who were decisive in the English literature. As we learnt, English literature is everything what is written in English. One of the authors was Geoffrey Chaucer, who wrote his poems in English when everybody was writing in French. Now he is considered the father of English literature. He was also the first poet to be buried in Westminster Abbey and his work was just for the powerful people in society, only for kings. The second of the writers was William Shakespeare, who wrote plays, which was essential to reach all parts of British society, because they only needed to listen, not read. The last one was Charles Dickens, from the Victorian age. He wrote novels during a time when more and more of the British public could read.’

Well done Fernanda, thank you for sharing your story! 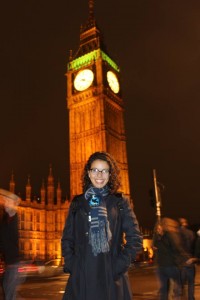