The weather: the perfect way to start a conversation with British people.

We would like to thanks the Advanced and Upper-Intermediate English students for creating this summary of a chapter in ‘Watching The English’ by Kate Fox. 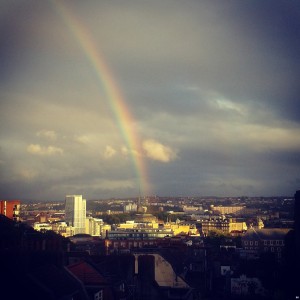 ‘When two Englishmen meet, their first talk is on the weather’ says Dr Johnson.

Many observers have tried to figure out why English people are so interested in the weather but they misunderstood this phenomenon. The common mistake is treating this converstaion as real discussion about the weather, whereas it is actually an exchange of greetings.

It’s a form of code which helps to start a conversation. For example, questions like ‘Nice day, isn’t it?’ ‘Ooh, isn’t it cold?’ ‘Still raining, eh?’ are used to overcome the natural exchange between the speakers.

These greetings are just another way to say hello, so we should always respond saying for example ‘Hi, yes isn’t it’. Unwritten and accepted rules dictate a repetitive pattern of conversation about the weather.

The context rule includes three different ways in which the weather can be used as a greeting, ice-breaking. The fact that the weather is so changeable in the UK makes it a good subject of conversation.

Talking about the weather is not the main interest for English people, just as totems were not just symbols used to define social structure.

The main rule of the weather-speak is to never disagree. The disagreement is rare; it would be seen as rude and would lead to an uncomfortable silence.

On the other hand, there are some exceptions to the rule.

English people grade the different types of weather and the adjectives which define them. This fact creates a hierarchy of words that they use both in a weather conversation and in their current life.

For example: sunny and warm days are two of their preferences and people use them as a way to express a positive side. On the other hand, we can find cold, rainy or cloudy days that are usually used in a negative way.

This unofficial English weather hierarchy is subscribed in every aspect of our society, even the weather forecast use it to define the English weather.

The weather as family rule

They consider their weather as part of their family: they can complain about it but foreigners can’t. they don’t accept criticism especially from Americans who tend to belittle the English weather. British people consider it rude.